This book sets the scene of Victorian times, and a little further into the Shadow hunter world / history.

It is a lot darker a lot sooner than the mortal instruments books, but every bit as gripping. The clinches between our heroine and the leading men are just a steamy as can be expected with out detracting from the good story line. This book lays out the basis for the adventure ahead, you get to see the main players and to get a real feel for them, understand or not understand them as the story will require.

Another book that takes you by the lapels and drags you into its world.

The second in the series and you see the relationships between the main characters develop, the inevitable love triangle presents it self , but its dealt with in a very gentlemanly fashion. These books do exude the manners and propriety of the 1800’s era of when they are based. A lady never shows too much emotion and is never forward, for want of being thought wonton and with out breeding. This however does not stop what goes on behind closed doors.
The story develops further and we see a clever plot unfold before us, with twists and turns and that ever gripping, teeth grinding annoyance as things seam to be going the way of the bad guy, and the end of the world.

Lots of shocks and omg moments, also at lot of references to the mortal instruments books, with things that will make you smile when you recognise them.

The love triangle seams to have been solved with a marriage proposal, things as ever do not go to plan. in this book we see the bad guys plan unfold its last surprise. There are times of true despair and desperation. There where plenty of times, my hand flew to my mouth through shock and fear for the characters, and also lots of smiles and laughs.

I think I may hold a record for the amount of times I said OMG! through out this book. There are lots of surprise relationships spring up in this book, as well as nods to the mortal instruments books and explanations to things in the mortal instrument books also. As well as the full un ravel of the bad guys plans, and surprise measures used against him.
I must admit though this book is very sad at the end and I recommend tissues!

My over all rating for these books is 5/5. The story sucked me right in and made me care for, possibly even love some of the characters. They have moved emotions inside of me which is a hard thing to do.

I will be very interested how the films will portray these books are there are some quite quite dark and scary moments. I also can not wait to see who they will cast as Will and Jem, as between these two gentlemen and Mr Jace of the mortal instruments my heart is very much torn!
My only criticism of these three books, is the verses of poetry at the beginning of every chapter in all the books. By the end it felt to me they were just a way of getting an extra 30k words into a book without having to do any actual work of your own. I can see why the idea appealed to Cassandra Clare, as the main characters have a great fondness of the written word, but for me its just became an annoyance.

So as you can see from my title I have read 13 books (dum dum dum) I have a few different books at my disposal. The wee free men, Da Vinci code and angels and demons. But I will be now continuing my journey with the dwarves with the second Dwarves book.

So till next time Hail and Fair Well Brother……..

You maybe wondering what the hell happen to week 4’s update. Well quite frankly so am I! 🙂
I have been mega busy with back to school / nursery, birthdays, jam making and inventing, and of course reading.

I have only managed to read the one book in all this time, o ooh no, lagging. But i have been working on my own books so I guess its ok as this challenge is all about improving my writing skills so that my book can be awesome, so if inspiration hits me ( at 3 am most times, thanks! ) Then surely I should write huh?

Anyway I have read The Dwarves by Markus Heitz and heres my review:

I’ve wanted to read this book for sometime, actually ever since seeing it in Waterstone’s book store. Its a big black book with a dwarf on it. It looks mysterious and inviting to a nosy parker like me, as it gives nothing away. Plus for all the fantasy books I’ve read, lots of them including dwarves into the story, I knew very little about dwarves. And these creatures fascinate me!

So I got this book and started it with a great keenness to read it. Now it is a little slow going at first I’ll grant you, but it so worth hanging in there and keeping going! The story is very good and well planned out. The book had me guessing and second guessing all the time. I learnt so much about dwarves from the story. But also the others in the dwarves world, like  elves and just why the two races despise each other. And the Alfar, man oh man you don’t want to meet one of those bad boys, ever!
There are some quite gruesome and possibly scary parts of the book, as it draws you in and you get involved, so much so that when reading it in the bath and your pens rolls off the side and clatters to the floor you have a mini heart attack! Yes this was me, at around 2/3 am one evening.
It did also keep me up reading as I needed to know what happened next.

The book met my expectations and possibly passed them, I thoroughly enjoyed the book and look forward to the next installment.

My score for this book  5/5  Well written, got me reading until late in the night with this hunger for more. Definitely recommended. 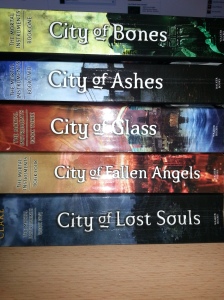 This is my next task……. wish me luck, and I’ll see you in about month hehehe 😉
But on a serious note I will be hopefully writing my review of the first of these books next week ( 12th Sept ), so adios amigos!

This week I have been on holiday… Camping.

This past time is NOT as conducive to reading as one may think! Especially when you have 2 young children, and 2 dog’s.

Anyway I have managed to read 1 of my 3 chosen books so I will now review it, tally up how many I have read and how many to go, list the next bunch of books I propose to read and work out how many books a week I now have to read in order to complete my challenge!

I’ve seen Trudi’s books many time in the book stores and always said “I’ll read them one day” well I’m glad I’ve started. This book is not as grand as GRR Martin or Pat Rothfuss, but it definitely held my attention (often until 3 am!)

This story is wonderfully simple to follow and understand, it draws you in and keeps you reading. It has a lovely way of setting the picture of the world which these magicians exist, their culture and history. I assume the other books she has written are all based in this world and quite frankly I can’t wait to read more of them!

My score for this book  4/5  Well written and a great introduction to the world Trudi has created.

This book brings my total to 4 so far. Which means I have 96 to go.

This works out to still be just under 2 books a week (1.9 to be exact!) I will try to push myself into reading more than the specified 2 books a week, I’d like to have Christmas off 😉

I am part way through the Assassins Apprentice – Robin Hobb, so that will be the first book of this new week, I’ve also been to see mortal instruments at the cinema. The film wasn’t half so bad as I expected, in fact I actually really enjoyed it. Its not so much Twilight as its more like Blade, underworld, Van Helsing and others of the nature. I have also been told there is a series of books that have inspired this film. So the list will be:

The fate of the Dwarves

The revenge of the dwarves

The war of the dwarves – Markus Heitz

That seams a lot of books for one week, and your right 🙂 I will pick 2/3 books from all of the above!

You will have to forgive me for listing them all but I need to get them all down or I will forget them, and more over forget what order they go in to read, as they are all trilogy/series books.